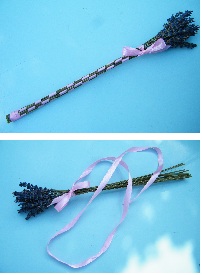 This type of lavender wand is much less fiddly to make than a lavender bottle, and it is often more convenient as it can be produced year-round from dried lavender stems. However it is more brittle as the dry flowers may drop with excessive handling.

Method
First tie the stems together below the flower heads with one end of the ribbon, and tie into a bow. Then weave the ribbon around the stems – over two and under two at a time. At the bottom, finish neatly by wrapping the ribbon round the bundle of stems a couple of times before poking it though the bundle and cutting off the excess.

This style would make a very good wedding favour or decoration as the ribbon could be chosen to match the colour scheme. A young bridesmaid would have fun brandishing one instead of a posy, with the benefit of being less expensive! 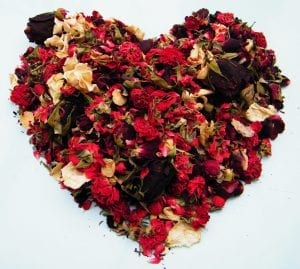 How to Make Paper Confetti Cones

Paper confetti cones Paper cones can hold a variety of items such as sweets, popcorn or potpourri, but we are…