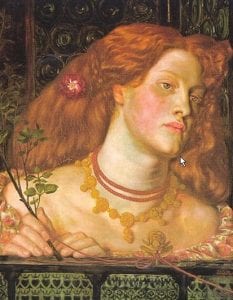 The title refers to the mistress of Henry II (1154 to 1189), who was famed for her beauty and known as “The Rose of the World”. She was reputedly kept hidden in a Palace built by the King, hidden in gardens at the end of a maze. The thread she is holding in the painting presumably shows the way through the maze. She is ready and waiting for the King to visit her.

On her death it is said that Henry ordered her tomb to be decorated with masses of roses, and for every year afterwards. The rose used was Rosa Gallica Versicolour, also known as Rosa Mundi.

My inspiration for this version of the painting was to attempt to recreate the beauty of the image using something beautiful in its own right – natural dried flower petals. Owning a dried flower shop made it easy for me to source everything I needed. I was also keen to make two points: firstly dried flowers need not be  dusty and boring, and secondly there is more to dried flowers than just lavender! 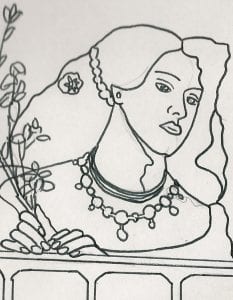 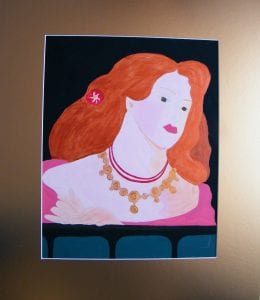 I started by taking an outline of the painting and filling it in with acrylic paints. Then I started gluing on the tiny petals – few were more than 1cm across. I experimented with glues and found that high-tack PVA was able to adhere the petals firmly without discolouring them. Of course I had to simplify the design, and unfortunately the thread had to go. She is also much paler in my version, because unlike Rossetti, I do not have the skill to portray strong cheek colours realistically!

My colour palette was limited to the dried flowers available: Delphinium petals were the most useful as they come in a range of pinks, whites and blues – I used mainly ivory for the skin with a few pale pink; dark pink for the necklace and dress, and dark blue for the details underneath the windowsill. I also used delphinium petals to make up the Rosa Mundi flower in her hair. 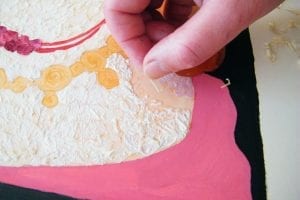 I took a rose branch from the garden and dried it flat to make the one she is holding. I took a single freeze dried red rose petal for her lips and cut it to shape.

The bottle glass background behind her was made with natural dried green hydrangea petals (they come in florets of four petals which I pulled apart), as were her eyes.

Her hair provided a dilemma as I didn’t want to detract from the luxuriance by sticking on something inappropriate. I considered dried orange slices, which were a perfect colour, but they would have made her look like a scarecrow! In the end I compromised by choosing a metallic copper paint, and only using the orange slices for a single plait.

Finishing touches were provided by cloves, which were used beneath the windowsill, and rhodanthus flowers to decorate her dress.

I finished it all off with a gold frame onto which I heaped all the ingredients for the final photo.

I found the whole exercise really enjoyable. It took me a few winter Sunday afternoons, and I will probably do another one later in the year. I know I’m no artist, but it’s amazing what you can do with a few petals and a bit of imagination!